One of the many factors that have contributed to the massive expansion of solar energy over the last decade are solar incentive programs. Among the largest and most impactful of these incentives is the federal solar investment tax credit, known more simply as the solar ITC. The  current 26% ITC was  recently extended through 2022. Let's take a closer look at what this means. 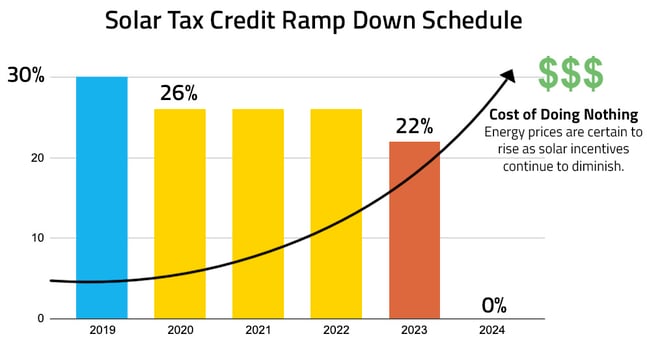 2019 marked the end of the solar ITC's long-standing 30% rate, which had been in place for more than a decade. In 2020, the the solar tax credit began its planned ramp down schedule, dropping to 26% with the next step down to 22% originally scheduled for January 1, 2021. At the last minute, Congress decided to pause the ITC's planned ramp-down as part of the stimulus package that was signed into law in December 2020. With its new schedule, the ITC will hold at the current 26% through 2022, then drop to 22% in 2023 before ending entirely for homeowners in 2024.

Obviously, the big takeaway is that if you want the fastest ROI for your solar investment, the recent ITC pause just gave you a slight breather. But don't get too comfy. It is absolutely certain that as we get closer to the end of the ITC, demand will grow and so will solar installation backlogs and wait times. In fact, most solar companies have reported longer than usual permit backlogs and increasingly packed install schedules many months before the ITC ramp-down began in January of 2020.

Starting your solar project now not only means you'll start saving on your electric bill sooner than later, but it will help you avoid the mad dash as the ITC and other incentives age out. Of course, extensions like what happened in December 2020 are certainly possible, but you shouldn't count on them.

What is the new ramp down schedule?

The previous 30% rate was active through the end of 2019. The current 26% rate is in place until the beginning of 2023 when it decreases to 22%. From 2024 onward the ITC will no longer exist for homeowners, but the commercial ITC will remain at 10%.

While 4% less than previous years, the current 26% rate still has a sizable impact on the payback period, reducing it by a factor of several years in some estimates. When it drops to 0% in 2024 the payback period will extend considerably. So, if you're inclined to turn Arizona's most abundant natural resource into immediate energy savings, we strongly recommend grabbing the 26% rate before while it's still here.

How can I claim the 26% solar tax credit?

To be eligible to claim the 26% tax credit, your solar energy system must be installed, paid for, and commissioned by your power utility in the year you wish to claim it on your taxes. Only purchased systems apply. If you're leasing, the tax credit goes to the lease holder. To file your taxes claiming this incentive, you'll need to complete the IRS form 5695 - Residential Energy Credits. We strongly recommend speaking with an accountant to cover the intricacies of filing and claiming your 2021 solar tax credits to ensure you've completed it properly.

Will it get extended again?

The ITC was first established as part of the Energy Policy Act of 2005. Congress has extended the incentive's three times, with the most recent extensions taking place in 2016 and 2020. The extension that passed in 2020 detailed the current ramp down schedule that phases out the tax credit completely for homeowners by 2024. There is always a chance that another bill to extend some version of the ITC will be proposed again in the future, but this should never be counted on for your solar planning. Plus, waiting only means you're paying the utility for power when you could be saving on that power bill now. We strongly encourage you to capitalize on the 26% rate rather than gamble on unknown legislation.

At Sun Valley Solar, we always say, "The best day to go solar is yesterday" and with each passing day, that hyperbole holds more truth now than ever. Click here to contact one of our qualified solar integrators to start your solar project today. Or, if you'd like to do more research, we invite you to download our free solar guide, "Is Solar Right For You?"

*This blog has been updated since its original publication of 1/15/2019 to reflect 2021 solar tax credit rates.

6 Tips to Help You Save on Your Summer Electric Bills

How to Be Green in 2021: Resolutions for the New Year

What's the Difference Between a Kilowatt and a Kilowatt-Hour?