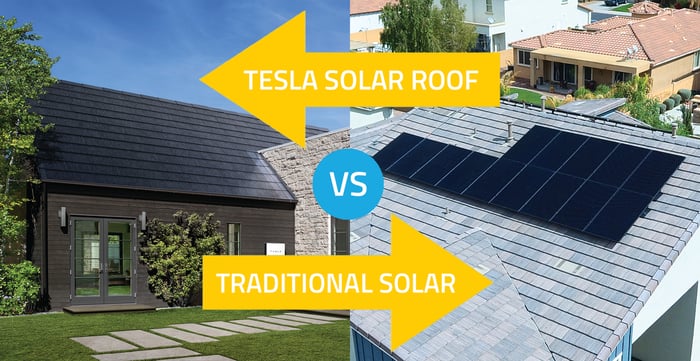 The Tesla Solar Roof is here and with it comes many questions. You might be wondering... How does it compare to traditional solar panels? How does it work? And ultimately, what does Solar Roof cost? In general, the differences between the two options come down to the condition of your roof and what you value most out of your solar investment. Let's take a closer look at how they compare.

Comparing Tesla Solar Roof and traditional solar panels isn't entirely an apples-to-apples analysis. After all, Tesla Solar Roof is a fully integrated roofing and solar energy system that replaces your existing roof. As such, if your roof needs replacement anyway, and you're interested in solar, Solar Roof is a reasonable place to start. Conversely, if your roof is solid, you'll get a much faster ROI by going with traditional solar panels since they can easily be mounted to almost any roofing material, so long as it's healthy.

Let's take a closer look at some of the other considerations when comparing Solar Roof to traditional solar panels.

Tesla Solar Roof: Solar Roof is a fully integrated roofing and solar energy solution. As such, there is no visual differentiation between non-solar tiles and solar tiles. Everything on your roof looks consistent. There is also no panel racking and very minimal exposed conduit. In short, with Solar Roof, your rooftop reveals no aesthetic compromise and looks incredible from any angle.

Traditional Solar: Solar panels are attached to a racking system and sit several inches above the existing roof surface. Buyers can choose from multiple panel options ranging from all-black to black with silver frame. Racking is typically black anodized aluminum, although traditional aluminum is also used and can be a more affordable option. While panels are clearly visible, people have grown accustomed to seeing rooftop solar arrays - especially around Arizona. That familiarity, along with more modern all-black panel options, make traditional solar arrays much more pleasing to the eye than even a few years ago.

Tesla Solar Roof: Efficiency numbers for Solar Roof are not readily available. In a recent analysis, PV Magazine estimated Solar Roof efficiency between 4-11%. Overall system production depends on the density of solar tiles to non-solar tiles throughout the roof.

Traditional Solar: Most modern solar panels operate between 15% to more than 22% efficiency, depending on the panel. Overall production depends on the total number of panels installed. In short, you get much more energy per footprint with traditional panels.

Tesla Solar Roof: Solar Roof pricing is the sum of two categories – roofing materials and solar components. Remember, not all solar roof tiles produce electricity. In both categories, final pricing is heavily influenced by roof size and complexity. General cost guidance for the roofing side is roughly $10-$14 per square foot, with higher costs dependent upon roof complexity. On the solar side, pricing is estimated at $3.50 per watt. The more solar tiles in the design, the higher the price and power production. Tesla estimates the total project price by producing preliminary designs that include both the minimum and maximum density of solar tiles. Customers may choose any achievable amount between those two values.

Traditional Solar: Cost estimates for solar panels are significantly more straightforward than Solar Roof. In Arizona, around $3 per watt is an average cash purchase price for a fully installed solar energy system -- about half that of Solar Roof with the same production capacity.

Tesla Solar Roof: Not applicable. Roofing and solar panels are one integrated system.

Traditional Solar: None, unless roof needs repair. Traditional solar can be installed on almost any roof so long as that roof is in good condition. If roof replacement is needed, $4.00 per square foot is considered a reasonable average for a new roof in Arizona.

Tesla Solar Roof: Solar Roof will not work on flat roofs or roofs with too many architectural features. Also, as a new technology, Solar Roof is new to many building and fire authorities, power utilities, and HOAs. This may slow the approval and permitting process in some areas.

Tesla Solar Roof: As a new technology, permitting timelines may be extend until the product becomes more prolific. Timelines will also vary with seasonal demand and permit backlogs.

Traditional Solar: Traditional solar is well established with clear permitting procedures. From design through commissioning, a solar project is typically completed 3 - 5 months, depending on seasonal backlogs.

Traditional Solar: Up to 30 -year warranties against manufacturer defects and system failures. 10-year workmanship warranty from SVSS, including roof penetrations.

If you're wondering if solar is right for you, we invite you to download our free guide, "Is Solar Right For You?" In it you'll find various factors that contribute to a solar purchase.

Does a Solar Array Increase Your Home’s Value?

How to Be Green in 2022: Resolutions for the New Year

Pros and Cons of Leasing vs. Purchasing a Solar Energy System

Is Bird Proofing Your Panels Important In Arizona?