Top 5 FAQs Businesses Have About Solar 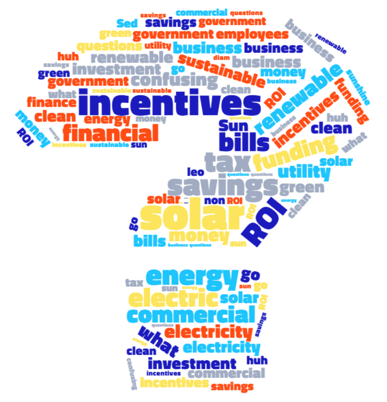 Are you thinking about adding solar to your business, but aren’t sure where to start? Going solar is a big investment and should be considered carefully. It's critical to understand the ever-evolving landscape of local utility rates as well as local and federal incentive programs.

To help get you started, we compiled a quick list of the most most frequently asked questions that businesses have about solar. While hardly comprehensive, there’s enough here to get your wheels turning. As always, we’re standing by to answer any questions you may have about solar and your business.

Q 1: It seems the utilities are working against solar. How do I know that my investment won’t be minimized or made obsolete by future utility shifts?

A. Precedent is on the side of solar in Arizona where the local utilities have always grandfathered current solar customers into their existing plans as new rates are introduced. Even as recently as the 2017 APS Rate Case, existing solar customers were the only ones allowed to keep their legacy rate plans.

In Nevada, the story is a little murkier, but still very pro-solar overall. After a temporary loss of net metering between 2016-2017, the Nevada State Legislature voted to revive an energy buyback program in late 2017. After a legal and national PR backlash, all indications suggest that Nevada is unlikely to open any new anti-solar legislation in the near future, if at all.

Q 2: How would my bottom line improve with solar?

A. Obviously, one of the most popular motivations for going solar is the financial savings. The majority of companies can reap major financial benefits from solar—most directly in regard to utility bills. This happens in three primary ways:

Q 3: How can solar directly improve my business?

A. Financial and brand reputation reasons are good motivations to go solar. Companies that have invested in large-scale commercial solar report immediate improvements in several key areas, including:

Q 4: Why should I go solar now? Won’t the price drop or technology improve?

A. We did indeed see a reduction in panel pricing in the first few years after the technology became mainstream, but price drops have been far less dramatic in recent years as the industry matures. More important than panel pricing alone are state and federal incentive programs, which generally have a much more dramatic impact on system price. The large federal 26% tax credit is currently on its ramp down to 10% in 2024, so now is the time to do your research. When evaluating commercial solar, company leadership should be sure to fully consider:

Q 5: If solar is all that it's cracked up to be, why don't all businesses install it?

A. Just because you can’t see the panels doesn’t mean that they’re not installed. In actuality, adoption of commercial solar is on the rise and the list of solar-powered companies reads like a “who’s who” of successful businesses. Companies like Walmart, Apple, Target, and Amazon are all reaping the benefits of cheap and clean energy from the sun. Here's the top ten list of 2019’s top US corporate solar users.

In other cases, some businesses might believe that purchasing a system outright (versus leasing or entering into an SSA or PPA) is their only solution. As a result, they believe they must first acquire the necessary capital or secure a loan.

We invite you to learn about the Sun Valley Solar difference and talk to one of our commercial solar experts to see how solar can help you achieve your business goals.

Common Ways to Pay for a Solar Energy System

What Happens to Solar When the Power Goes Out?

5 Reasons To Be Thankful For Solar in Arizona

The Faces of Solar