What is a Solar Inverter? 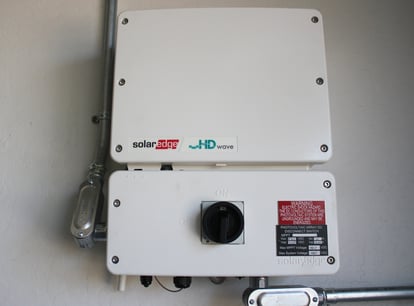 When you think of a solar energy system, the first thing that comes to mind is most likely the panels. Solar panels are the most visible and largest part of a solar power system, so it makes sense why it's the most thought of element when picturing of the overall system.

Quite obviously though, there's a lot more that goes into a solar energy system than just solar panels. You have your solar meter, your inverter, disconnects, conduit, racking, and sometimes a battery or two depending on your specific configuration. While all these parts work in concert to turn Arizona's abundant sunshine into usable energy, the solar inverter is easily one of the most important single components.

In this blog, we'll be taking a closer look at the solar inverter, how it works, and the different types of inverters available today.

What is a Solar Inverter?

In a nutshell, the inverter is the piece of your equipment that converts the direct current (DC) energy produced by your solar panels into alternating current (AC) energy that your home requires. The energy produced in a solar panel by itself isn't useful since it's DC energy and not compatible with  the AC compatible appliances found in most homes. So without an inverter, the sunlight turned into energy from your solar panels is simply unusable inside your home.

How do Solar Inverters Work?

When sunlight hits your solar photovolataic (PV) panels, it activates the electrons within the panels. These electrons start moving and produce direct current (DC) energy that is stored in the solar cells. This energy travels down into the inverter where it "inverts" the energy into AC energy. When you're using more energy than your panels are producing, your home will draw extra energy from the utility grid, or a battery if you have one connected to your system. Conversely, If your solar panels are producing more energy than you're using, the excess energy will either be sent back to the grid or stored in your battery for use later. Since batteries store DC energy, the solar inverter still plays a critical role by converting (or "inverting") the stored DC energy into usable AC energy for your home.

There are different inverters on the market today, each with their own pros and cons and usefulness depending on your specific solar array setup.

This is the most common type of inverter for smaller-scale solar arrays. All of the panels are connected underneath in a "string" that gets routed to a centralized inverter.

Out of all the inverter options, this one is the most common for a couple of appealing reasons. It's the most cost-effective, the most durable, and the easiest to maintain. The biggest drawback to a string inverter is the potential for a slight performance drop that can happen when a single panel in a string goes down, and therefore blocks the flow of energy from other panels down the line. For this reason, string inverters are ideal for simpler roof layouts where the potential for shading due to adjacent tree growth is relatively low.

Instead of having all of the solar panels connected in a string to one main inverter, each panel has its own, smaller inverter on the underside. These microinverters convert the energy right there on the roof instead of first sending it to a centralized inverter.

The most notable benefit to homeowners with this kind of inverter is improved efficiency. Since it's converting the energy right under the panel, there's no issue with a single panel affecting others, like in the string inverter configuration. On the flip side, microinverters generally cost more than string inverters and can be difficult to maintain due to their location under the solar panel. Microinverters are more geared towards complicated roof or panel layouts, or where shading could pose an issue.

Similar to microinverters, power optimizer generally cost more and are harder to maintain than a simpler string inverter. As such, power optimizers are generally ideal for larger or more complicated system designs, or where shading is common.

Which Inverter is Best for You?

As you can see, there are various pros and cons to the three main inverters available today. Along with considering the benefits to each, you also have to consider the overall setup of your system and whether or not shading will be an issue. The good news is that you don't have to decide by yourself which one would make the most sense for your solar array. Choosing a qualified and experienced solar installation team will take the stress out of this decision. They'll go over your options and help you determine which solar inverter is the right combination of cost and efficiency for your unique setup.

If you're ready to start your solar project, simply click the button below to request a free, no-obligation solar consultation. If you're not quite ready for a quote, we invite you to download our free guide, "Are Solar and Batteries Right for Me?"