According to Mike Bristol, manager of engineering and operations for ED2, “We researched many months before selecting an installation partner. We conferred with local businesses that had already invested in solar, and ultimately selected Sun Valley Solar Solutions for their reputation and proven ability to execute more complex commercial-grade installations.”

The final design incorporates more than 3500 high efficiency SunPower solar panels installed on a single axis tracking system. The computer-controlled tracking system allows the panels to follow the path of the sun throughout the day for maximum sunlight capture and a much higher energy production during peak daylight hours, which is also when consumer demand is at its highest. 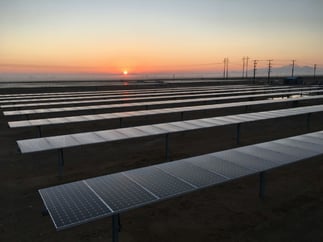 ED2 has a history of pioneering new frontiers in energy distribution. Starting in 1923, more than a decade before passage of the Rural Electrification Act, ED2 was the first electrical district in Arizona. ED2 provided a cheap source of electrical power to farms, businesses and residences, thus improving the area’s economy.

Nearly 100 years later, ED2 is again looking ahead as it deploys its first large-scale solar plant. It is expected the facility will generate more than 100 million kilowatt-hours during its lifetime, and reduce the need for power purchases from sometimes volatile power markets, possibly saving the district millions of dollars in the years ahead.

In addition to its immediate financial impact, ED2’s new solar energy investment is designed for possible future expansion, allowing ED2 to keep pace with changing technologies and the possible addition of more panels and production capacity down the road.

4 Reasons Spring is the Best Season to Go Solar

Common Ways to Pay for a Solar Energy System