What Is Clean Coal and How Does Solar Beat It? 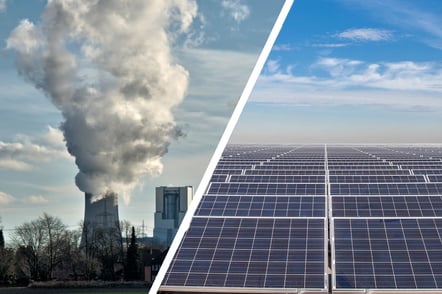 You might’ve heard some talk about clean coal in recent news and politics. On the surface, it sounds like a promising solution to our climate change crisis. After all, it literally has “clean” in the name!

Coal is one of the largest energy producers in the world, not to mention the largest polluter as well. So, if we can make it environmentally friendly, it’d be a win-win, right? Not so fast.

Before we get too excited about this alternative to renewable energy, we should remember that what’s gold might not always be golden, and to look at this form of energy with a critical eye.

First and foremost, what is clean coal?

Clean coal refers to a type of technology that aims to reduce the CO2 emissions released into the atmosphere from burning coal. This almost always is referred to in conjunction with carbon capture and storage facilities (CCS), which captures these CO2 emissions and stores them under the earth. One way this process happens is when a CCS plant burns coal, the equipment extracts the CO2 from the exhaust gas, which would then travel through pipelines to transport it into underground storage. This storage place will then have to be sealed and monitored for thousands of years to ensure it doesn’t release or leak the CO2.

How Does Solar Beat It?

1. Let’s start this part with something we all care about: money. It’s significantly cheaper to build a solar farm than retrofit old coal plants with CCS technology or build new CCS plants. One analysis shows that coal plants equipped with CCS are nearly three times more expensive than onshore wind power and more than twice as expensive as solar photovoltaics.

2. The air released from CCS plants still isn’t clean. Removing the CO2 from the exhaust gas doesn’t eliminate other harmful chemicals also found when burning coal. Even if the power plants aren’t pumping out CO2 anymore, there are still dangerous elements that are produced, like mercury, nitrogen oxide, and other poisonous chemicals. Sequestering the CO2 underground also poses the potential to contaminate aquifers. Even with a small CO2 leak, the gas can bubble up into drinking water aquifers near the surface, increasing the amount of contaminates in the water at least ten times. Solar panels don’t release harmful chemicals during energy production or contaminate water. In fact, solar actually saves water whereas CCS (“Clean Coal”) facilities require additional water for cooling – even more than a traditional coal plant.

3. Clean coal also ignores the fact that coal is a limited resource, and the sooner we shift towards renewable forms of energy, the healthier and more sustainable our civilization becomes. If the same investment in CCS was put into solar energy, wind turbines, and energy storage, we could be certain that our main sources of electricity would stick around for many millennia to come, while dramatically limiting, or even erasing, all negative environmental impact.

If you’ve been thinking about making the switch to solar, now is the time to act! We invite you to contact one of our solar experts for a custom solar quote. If you aren't quite ready for a quote, you can download our complimentary whitepaper: Is Solar Right for You?